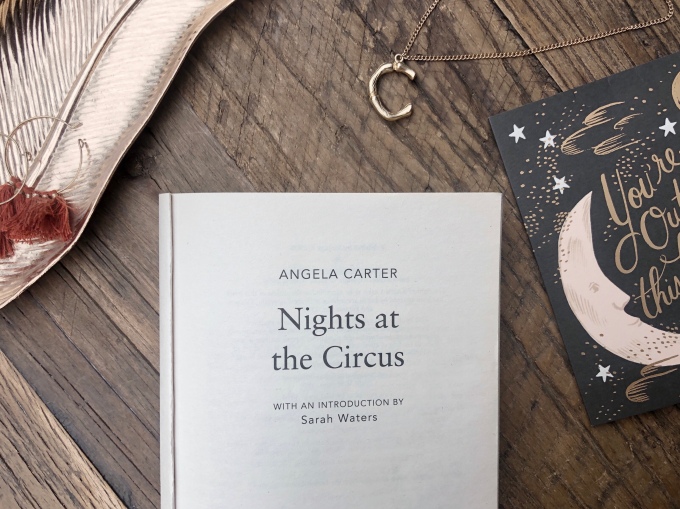 In her novel, Nights at the Circus, Angela Carter uses ideas of performance to discuss identity. Inherent in the narrative, there is the question of how identity can be created and restored: do we, the performers, control our own identities, or are we only who our audience perceive us to be? Today, I will discuss both of these possibilities and inquire into how Carter seems to suggest that identity can be created and re-established.

Erving Goffman, in his book, The Presentation of Self in Everyday Life, refers to performance as ‘all the activity of an individual which occurs during a period marked by his continuous presence before a particular set of observers and which has some influence on observers’. He suggests that when we partake in social interaction, we create a front, an image of ourselves that we have crafted, and then project in attempt to make others believe that what they see is the truth. Or in other words, as Buffo suggests in Nights at the Circus, ‘we make ourselves’. We can apply Goffman’s definition of performance to Carter’s character, Fevvers. It seems as though Fevvers, particularly in the first section of the novel, does perform to her audience, Walser, creating an image of herself in his mind. She paints herself as a ‘larger-than-life heroine’, mysterious and intoxicating and her rhetoric captivates the reporter. As the first section of the novel comes to a close, Carter depicts Walser, still in awe of Fevvers and her interview: ‘What a performance! Such style! Such vigour!’. He is struck, perhaps even seduced, by Fevvers’ rhetoric and it is interesting that Carter uses the word ‘performance’ in Walser’s response to the interview. Fevvers is an aerialist, a literal performer in the circus and we can draw parallels between her performance on stage, and her performance in the interview. Carter reveals that Walser’s first impression of Fevvers was that she could possess only ‘physical ungainliness’, yet she performs with grace and elegance, and in the same way, Fevvers voice, ‘with its warped, homely, Cockney vowels and random aspirates’ is, at the same time, ‘swooping […] imperious as a siren’s’. Her rhetoric is as graceful, as intoxicating and as impossible as her performances in the circus. When Fevvers’ audience watches her plunge, ‘eyes [fix] upon her with astonishment, with awe’, and her interview, her ‘performance’ for Walser certainly has a similar effect on him. The interview is set up for Walser to ‘puff’ Fevvers, to expose her as a fake but when she begins her narrative, Walser is no longer the most authoritative interlocutor: ‘Fevvers lassooed him with her narrative and dragged him along with her before he’d had a chance to ask Lizzie if-‘. Walser is suspended from questioning Lizzie, from carrying out his role as a reporter, because Fevvers holds him captive with her narrative. Carter, herself, in her essay Notes From the Front Line, writes that ‘language is power, life and the instrument of culture, the instrument of domination and liberation’. Through taking control of the narrative, and therefore the way she is represented, Fevvers establishes an image of her identity in the mind of her audience and Walser is excited by what he hears; she holds power over him with her words and with those words, she is performing, creating herself as she wishes to be seen and Walser is drawn in. Fevvers does seem to perform in a similar way to the way that Goffman suggests that we all perform during social interactions. She desires that Walser will assume that she, in all her exuberance and mystery, is not simply playing a part but that she ‘actually possesses the attributes [that she] appears to possess’. Fevvers creates an image of herself as a heady and captivating enigma, taking control of her own identity and Walser, under her spell, is unable to do anything but fall for her words.

Fevvers loses grip of her self-constructed identity over the course of the narrative. As she begins to lose her striking looks — Carter tells us that ‘since she stopped bothering to hide her wings, the others had grown so accustomed to the sight it no longer seemed remarkable’ — she begins to question her identity (‘Am I fact? Or am I fiction? Am I what I know I am? Or am I what he thinks I am?’). Is Fevvers no longer the impossible wonder that she once asserted herself to be now that her audience is desensitised to her wings? Lizzie, worried about Fevvers’ sudden uncertainty, tells her, ‘you’re fading away, as if it was only always nothing but the discipline of the audience that kept you in trim’. We can certainly see evidence in the narrative that it may be the eyes of the audience that ‘created’ the version of Fevvers that we are introduced to at the beginning of the novel. Early in the text, Carter tells us of Fevvers performances: ‘Look at me! With a grand, proud, ironic grace, she exhibited herself before the eyes of the audience as if she were a marvellous present too good to be played with’. It is clear, here, that Fevvers thrives from the thrill that the audience experiences merely by looking at her. Towards the end of the novel, however, Fevvers is no longer the confident, self-assured performer that she once was: ‘Where was that silent demand to be looked at that had made her stand out? Vanished; and, under the circumstances, it was a good thing she’d lost it – these days, she would do better to plead to be ignored’. Fevvers, at this point in the novel, has lost all confidence in her identity as the mysterious and captivating aerialist, but is it this lack of confidence, or the indifference of her audience that leads to the lack of certainty in her identity towards the end of the novel? The answer is ambiguous but we can draw possibilities from the narrative. Just as Fevvers begins to doubt that she is in control of her own identity, Lizzie tells Fevvers to ‘show ‘em your feathers, quick!’ and Fevvers obeys. In performance, under the watch of the eyes that ‘told her who she was’, she transforms. The eyes of the audience ‘restore her soul’ and she believes that she can be the ‘blonde of blondes’ again. The audience stands in awe of Fevvers once again and while it can be argued that Fevvers’ identity is restored because others believe in her again, because she is only what they believe her to be, it seems as though Fevvers’ identity is restored because she believes in her magic again, because she realises that, even with a broken wing and her faded blonde, she can elicit awe; she is just as incredible as she always was: ‘It just goes to show there’s nothing like confidence’.

We can also look to Walser’s loss and restoration of identity to explore the ways in which Carter suggests that identity is established. From the beginning of the novel, Walser seems to have very little sense of self. Carter writes that it is as if his ‘habit of suspending belief extended even unto his own being’. Walser, though handsome and a talented writer, lacks character; ‘there remained something a little unfinished about him still’. The sole thing that defines Walser is his avocation as a journalist that ‘suited him right down to the ground’. Towards the end of the novel, Walser, as a result of his injured arm, can no longer write and so ‘he is no longer a journalist masquerading as a clown, willy-nilly, force of circumstance has turned him into a real clown’. He has lost was once defined him and without this, he is in a state of limbo, lacking a sense of himself even more than he was at the beginning of the narrative. Fevvers claims that ‘a girl could mould him any way she wanted’, that she could ‘hatch’ Walser, ‘make him into the New Man’. But when Fevvers finds him, she sees that ‘some other hen had hatched him out’ for ‘she saw he was not the man he had been or would ever be again’. It is Walser, himself, that ‘hatches’ this new ‘reconstructed Walser’. He rewrites his story and begins to live his life rather than watch it in the third person. At the beginning of the novel, Carter tells us ‘his name was Jack Walser’ and at the end of the narrative Walser tells himself ‘I am Jack Walser, an American citizen’. There is a literal shift from third to first person as well as the figurative shift that Walser claims that he now feels. It is not his audience, Fevvers, that recreates his identity as she claims she, and any other girl, could do, he creates his own and so Carter suggests that we are in control of our own identities.

Carter writes that Fevvers is ‘the most famous aerialiste of the day; her slogan, ‘Is she fact or is she fiction?’ And she didn’t let you forget it for a minute’. Fevvers exists within a question, a mystery. She embraces the ambiguities of her anatomy and her past and this is made clear during the interview. Lizzie, later in the narrative, reminds Fevvers: ‘You never existed before. […] You are Year One. You haven’t any history’. Fevvers knows only one thing of her past: that she was hatched. When she tells her story to Walser, she recollects having seen a picture that hung above the mantelpiece of Ma Nelson’s house: Titian’s Leda and the Swan. Fevvers confesses that in this picture, she saw ‘what might have been [her] own conception’ as she, ‘just like Helen of Troy, was hatched’. Fevvers gives herself the history of Helen of Troy, an inordinately beautiful woman from Greek mythology and, as a result, she, herself, becomes a myth in the eyes of her audience. The Oxford English Dictionary defines a myth as ‘a widely held but false belief or idea’, ‘a fictitious or imaginary person or thing’ and ‘an exaggerated or idealized conception of a person or thing’. Within each of these definitions, there is a complication of fact and fiction, and Fevvers applies this confusion to her identity in order to establish herself as a mystery, a myth. The question that we must ask ourselves, however, is why Fevvers does this. Audre Lorde wrote: ‘If I didn’t define myself for myself, I would be crunched into other people’s fantasies for me and eaten alive’ and perhaps the case is the same for Fevvers. Perhaps she defines herself so as to prevent others from defining her as a ‘freak’. Walser suggests that if Fevvers ‘were indeed a lusus naturae, a prodigy, then – she was no longer a wonder. She would no longer be an extraordinary woman, no more the Greatest Aerialiste in the world but – a freak’. While, yes, Fevvers is in control of her own identity (she is a mystery, a marvellous enigma), perhaps Carter suggests that she performs as this striking, wondrous mystery in order to give her audience the illusion of control: ‘whether I am fact or fiction, you must answer that for yourself!’. She retains control of her own identity by forging the appearance of malleability.

Carter suggests that we compose our own identities and, with confidence in the characters that we construct, we can retain control of, not only own identities, but of the way that we are perceived. The way that our audience views us is merely a reflection of the front that we reveal to them.

This site uses Akismet to reduce spam. Learn how your comment data is processed.